We are living in interesting times.  A worldwide pandemic has claimed nearly a half million lives as we near the midpoint of 2020.  Our American neighbours are preparing for an election that is arguable the most pivotal in the history of that nation, the outcome of which could have international implications for a generation or more, and there is growing unrest with the racial inequality that has plagued western civilization for nearly four centuries.  Sadly, it is the Christian church that has been more than complicit in the racial injustice we are now needing to confront.  At times Christian leaders have used – rather misused the Bible in attempting to justify racial injustice.  Whether it is the slavery and mistreatment of those of African descent in America or our First Nations neighbours here in Canada, we who claim the Christian faith must get on the right side of this issue.

So we thought it might be a good time to change gears for the next few episodes and have some honest discussion with those who have experienced the hellish brutality of racism and with those who have given their lives to change the culture.  In this episode, Brandon Blackshear from Dallas, TX talks about growing up in as a black youngster and a frightening encounter with police. But this is not about police brutality. We love our men in blue – and we will learn that recent high profile abuse by law enforcement is indicative of a much deeper rooted social issue. So let’s sit together for awhile and consider how we might better care for and serve our neighbour, whomever they are. You can use the player above – or go to Apple Podcasts to listen to the entire episode. 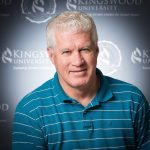 Derek is the founder of Lost and Found Podcast and the Pastor of Mission and Discipleship at Marysville Baptist Church in Fredericton, NB Canada